by Evie Odden at MSP Magazine

Joy McBrien is based in the Twin Cities, but she answered my Google Hangout from Peru, where she was stuck due to COVID-19 travel restrictions. While stranded away from home for the foreseeable future, her solace was that she had a safe and welcoming place to stay with her longtime friend and acting Peruvian host mom, Anita–the same Anita who inspired the name of McBrien's fair trade jewelry company, Fair Anita.

This is not the first time McBrien has lived temporarily in Peru with Anita. After being sexually assaulted in high school, she spent years travelling the globe to investigate violence against women and what people were doing to fight the problem in different cultural contexts. "Part of my inspiration was based on my own traumatic history," McBrien said about her decision to travel, and to eventually start Fair Anita.

Her research led her initially to Peru, which at the time had one of the highest rates of reported domestic violence cases in the world. McBrien worked at a battered women's shelter and was hosted for a few months by Anita. "I see how it affects me, and therefore I see how it affects my friends and women around the world," she said. "After learning about Peru, I started meeting with some really incredible women who were running women's rights organizations around the world."

What resonated with McBrien the most throughout her travels was the power of economic opportunity for women living in marginalized communities. One of the major reasons women stay in abusive relationships is because they do not have the economic resources to provide for themselves. Many women–including those in America–are forced to choose between basic necessities and their own physical and emotional safety.

By this time, the gears were turning in McBrien's brain, which was recently bestowed with a business degree. A lifelong entrepreneur, she started her first jewelry company when she was 15, and had minored in design in college. And she noticed a gap in the fashion industry. "The only fair trade companies, or ethical, mission driven companies I was finding at the time were well outside of my price range. And a lot of times didn't look like anything I was ever going to wear, either," McBrien said.

So, McBrien set to work in 2015, building a business model that designs jewelry for an American palate, sends the designs to jewelry makers in the global south, and sells the products for a reasonable price back in America. Most importantly, she makes sure her artisan partners are paid two to four times minimum wage, have health insurance benefits, and access to educational scholarships.

The women who make Fair Anita jewelry are not McBrien's employees. Rather, the business works with nineteen all-women artisan cooperatives. These cooperatives are located throughout nine different countries in the global south, and around 8,000 women total are employed through them.

However, Fair Anita does work closely with the cooperatives to break down the cost of materials and labor to determine pricing and wages. McBrien pointed out, "for some of the groups, if they were to give me a price, ultimately they would be undervaluing their own labor." Through this process, McBrien can ensure that the cooperatives make the money they need to pay their employees and get them their benefits.

Fair Anita's prices, averaging at around $18 for a product, can stay so low partially because the cooperatives are trying to use almost 100 percent recycled materials. In Peru, for example, the artisans find cheap copper for the jewelry by sourcing it from the inside of dead telephone wires. 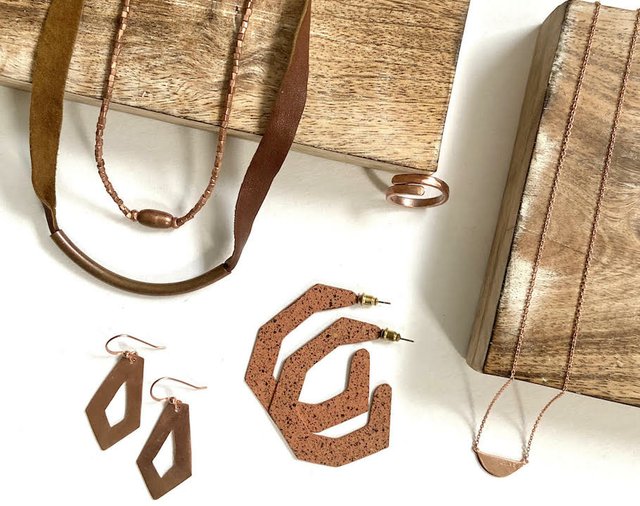 While McBrien is able to connect with many of the women she works with through their shared experience of sexual violence, power dynamics still exist between her and her partners, oftentimes complicating her intention to empower women who are, ultimately, very different from her. McBrien is young, tall, white, with sports blonde hair, blue eyes, and an American passport. Additionally, as the buyer of the artisan's products, she holds quite a bit of power over their job security–and the way they're represented through her company.

But McBrien doesn't shy away from these challenges, and told me that she wrestles with the differences in privilege between her and her artisan partners every day, and in every decision she makes for Fair Anita. She said, "ultimately, it just continues to be somewhat of a struggle to create this balance amongst the difference in privilege here. I'm trying to make sure the women here, in the communities we work with, have the resources they need to create better lives for themselves and their families. But I'm not gonna tell them how they do that."

In a way, it's quite simple, because Joy McBrien's job is not to "save" marginalized women or enlighten them to an American standard of living. Rather, she recognizes that when people get paid a comfortable wage, they are empowered to spend their money on the things that are most pressing for their individual needs.

Maybe it's a surgery, a new roof after a natural disaster, or an education for themselves or their children. Most importantly, if they ever need to, they can get themselves out of a violent situation. Or maybe, it's just buying themselves an ice cream cone on a hot day. McBrien explains, "especially for women who have been so marginalized, through violence, through disabilities, you've internalized that you're worthless. Buying an ice cream cone if you want it, these things that seem little, are not at all little. It makes all the difference."